Home > About > How Did This Project Start?

How Did This Project Start?

In a way, a cookbook is a little world of its own. There is something magical that happens when you read, say, Julia Child’s Mastering the Art of French Cooking or Samin Nosrat’s Salt Fat Acid Heat. In a sense, yes, they are short scripts of instructions dictating the preparation of specific items of food, but in a much larger way they are a glimpse into some of the most intimate knowledge you can have of another person. Eating is deeply personal--in a way, cooking is more so. The particular way that someone holds a knife or their stance at the stove differs from person to person, and when you know someone particularly well, their cooking is inseparable from who they are. So, when I read Julia Child’s recipes, I get the sense that although she never knew that I would come to exist, that I get to know her even if just a little bit.

Throughout 2019-2020, I dedicated a significant amount of my free time trying to capture this sense of knowing and apply it to my professional interest in the nineteenth-century. Combing through Etsy listings and shuffling through dusty antique stores, I slowly amassed a pile of old cookbooks--filled with scribbles in the margins, dotted with food stains, and even burned in places. Assembled on my bookshelf, these little worlds had become, to me, something of a universe.

At first somewhat directionless in my search, I set out with the mission to simply acquire as many nineteenth-century cookbooks as possible. With reading rooms being closed due to the Covid-19 pandemic, I wanted to find some way of being able to study these objects--many of which are not digitized. They are difficult to locate in antique stores, but not as difficult as you might imagine it to be. As my collection grew, however, I found myself continuously drawn to the books with significant damage--massive food stains, bits of newspaper glued on the inside cover, and, significantly, annotations. What did these annotators have to say about their food? How were they able to listen to these little worlds and so boldly speak back? Some might view annotation as defacement, that books should be kept pristine, but I think annotation is an act of bravery.

There are two women in my family to whom much of this work I have been doing over the last year is dedicated. My grandmother and great-grandmother, both avid annotators, left behind little textual traces of themselves when they passed that I have returned to at various junctures of my life and from them I have drawn strength. That magical feeling that I get when I read Julia Child, then, could perhaps merge with the wondrous boldness of a marked page.

When I was very young, I learned that my grandmother was dying of stage four lung cancer, an illness that she had lived with for roughly four years. As she was dying in a hospital in Texas, one of the belongings that she insisted she have with her in the hospital was her bible, the bible that her parents had given her when she was first married in 1955. In this bible, she had recorded not only the day of her marriage, but the birth of my father and then eventually the birth of my siblings and I. When she eventually passed away, I was given that bible and ever since, I have slept with it on my nightstand. Occasionally, when I would think of her, I would reach for that bible and start flipping through the pages, looking for any mark that she might have left--those little scribbles that line so many of her documents. In a way, I thought that if I could find these marks, that it would call up a memory of her in my mind that was slowly beginning to become fuzzy as I grew older.

There are many marks in my grandmother’s bible, but the page that she must have returned to again and again is Nahum 1:9. This verse talks about the destruction of Nineveh if they should rise up against God, a seemingly random verse to be so worn with use in her bible. One line, however, she has underlined and copied out onto a separate piece of paper tucked between the pages. That line reads “affliction shall not rise up the second time.” I return to that page in her bible often, thinking about what it must have meant to her, a terminal cancer patient, to resonate with this line. She didn’t just underline it--she starred it, underlined it, and even copied it out on a sticky note wedged between the pages. There are many things that I did not get to know about my grandmother before she passed. I was only eleven the last time I saw her, and there were questions I didn’t even think to ask her. Clearly, this verse meant something to her and through her markings, there were parts of her that I got the privilege of getting to know even after she had passed.

Similarly, my great-grandmother passed away when I was in high school. She was ninety-five years old and had an absolute spit-fire of a personality. By the time I was born, my great-grandfather had been dead for many years and after his death, she stopped cooking like she used to. I never got to know who my Nana had been when the kitchen had been a life source for her.

What I do have are her recipe boxes. She kept two recipe boxes in her lifetime and they are a veritable treasure trove of recipes. The boxes are so full of index cards, sticky notes, and newspaper clippings that the boxes hardly close, anymore. On each card, my Nana had written out a recipe, dated it, and recorded the name of the person she got the recipe from. Like my grandmother’s bible, these recipe boxes have taught me something about my Nana that I didn’t think to ask when she was still alive, namely that she cared very deeply about good food. She was both a professional librarian and a meticulous notetaker and both of these facts are made manifest in the card-cataloging system she developed for her recipe boxes. I get the same feeling reading through old, annotated cookbooks that I do when I hold my grandmother’s bible or my Nana’s recipe boxes--at once a sense of discovery, that you are the only one in the world to ever know how Betty liked her cucumber salad, mixed with a sense of wonder.

My favorite cookbook in my collection is a community cookbook from 1887, Centennial Cookery Book: Sold for the Benefit of the Woman's Centennial Association of Marietta, Ohio, a book that I found while wading through vintage issues of Cosmo in an antique store in North Carolina. The book was obviously well loved--full of newspaper clippings, annotations, food stains, and pieces of notebook paper pinned to the back with sewing needles.

Remi Kalir and Antero Garcia, write in their book Annotation that “annotation is a way that readers talk with their texts, to their texts, about and beyond texts, and within and through texts.” Certainly in Centennial Cookery Book, the annotator talks with, over, through, and on top of the text. For example, in this recipe for Watermelon Rind Preserves, the annotator has added “slices of lemon” to the printed text, pinned in a newspaper clipping on top of their own handwritten additions, and then annotated the newspaper clipping. The base-recipe, then, becomes something flexible, something that is open to interpretation and analysis like a novel or poem. This annotated recipe also, now, tells a story--that this is a recipe the annotator must have returned to to have annotated it at least twice. There are things we can know about the annotator, too. Their name is lost to time, but we know that they were almost scientific with their cooking--testing methodologies and hypotheses for how to make these preserves. We know that they liked watermelon, or at least cooked often enough for someone who did. We know that they were a newspaper reader. All of these little personal details are told through the hand of this anonymous cook. 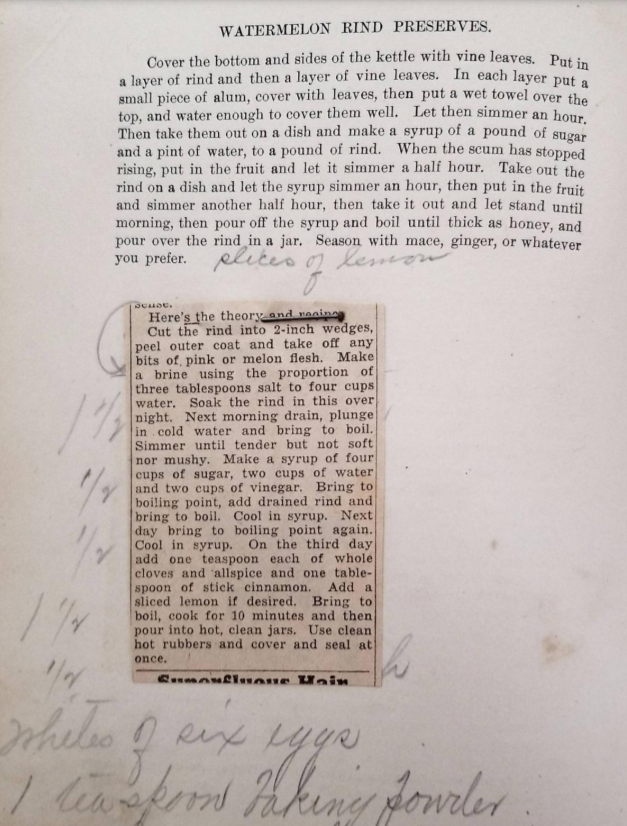 And so, I visited antique store after antique store looking for these marked up cookbooks. I spent hours sitting on the edge of my seat, waiting to outbid someone on ebay. I contacted etsy seller after etsy seller attempting to determine what their “authentic vintage cookbook” listing meant, date-wise. At some point, my mission shifted from being primarily to collect as many as possible to wanting to share my collection with others. I find these recipes absolutely fascinating and I want to share these little worlds with you. I began to look into digitization--what the process would look like and what it would cost for a graduate student like myself to digitize to any degree of quality and post them in a digital archive. In Ephemeral Material: Queering the Archive Alana Kumbier writes that "the ability to create records...depends on a number of social, educational, and economic factors including access to the materials and means to produce documents, and access to the education and training required to maintain them." The site began as a small Omeka site, full of scans created using my cellphone. Starting a digital archive project in the midst of a pandemic meant that I not only had to acquire the materials through antique stores and online listings, but that the entirety of the archive was developed in my bedroom. The stacks of dusty books teetering on my bookshelf, one at a time, became PDFs and metadata.

I am no archivist, I am an English PhD student who really loves marked up cookbooks and wants to share them with others. In order to do this work as best as I could, then, I reached out to a number of archives who house historical cookbooks, such as the American Antiquarian Society, to learn about what best practices are for metadata surrounding these texts. Primarily, I wanted to know how annotations are noted in metadata. Interestingly, it seemed that every archive I reached out to had their own way of denoting annotations or inscriptions in their digital catalogue and with many annotated cookbooks yet to be digitized, determining what “minor annotations,” means without access to the book, itself, could be difficult.

So, I decided to do something different. Many of the annotators in my collection--actually most of them--are anonymous. I do not and can not ever know who they were or even where they lived. However, I figured that I could let them take up space in my archive. For this reason, I decided to use the “contributor” field of the Dublin Core Metadata Initiative to denote that an anonymous annotator has contributed to the text. These annotations have transformed the text, modified it in such a way that it can no longer be considered a mere copy. It was important to me to capture that sense of authorship in the metadata regardless of what standards indicate the contributor field should be used for.

Currently, the digital archive is small but is rapidly growing. As I continue to learn more and grow my collection, I am hoping that my project will grow with it. This brief blog post was written with the intention of documenting the work I have been doing over the course of the last year as well as to hold space for these incredible annotators--including my grandmother and my Nana. Maybe you annotate your own cookbooks, maybe you remember your grandmother’s flour-covered hands working dough, maybe you can recall the precise scent of pecan pie baking in the oven. Each of these little moments are a type of ephemeral magic that I want to preserve.