For centuries, cookbooks and recipes have provided people working in domestic roles, and women in particular, a space to express their individuality and to orient themselves as writers. In the nineteenth-century, society was pretty starkly divided into a public and private sphere—the public sphere where politics, law, and debate were primarily practiced by men and the private sphere where domesticity, homemaking, and childrearing were primarily practiced by women. The sharp divide between the public and private spheres greatly limited the number of opportunities that women had to express themselves in writing.

Although a number of women published in the period, the genres which were considered permissible for a woman to publish in, such as domestic and sentimental fiction, left many women writers few pathways to publication. For this reason, many women writers in the nineteenth-century used genres such as domestic literature and sentimental fiction to push against gendered norms and societal restrictions on their public presentation.

Cookbooks, in particular, offered women in the nineteenth-century opportunities to express their individuality as writers as well as to participate in what would typically be considered masculine activities. For instance, in the nineteenth-century, community cookbooks—or cookbooks written for the purposes of raising money for charity—were extremely popular among church groups and offered an opportunity for women to connect with each other, form community, and to even organize around political issues such as suffrage.

More than just lists of instructions, the recipe-form offered a space for women writers to joke with each other as well as to challenge societal norms. For instance, in the popular joke recipe “A Recipe for Cooking Husbands,” the writer uses the recipe-form in order to joke about persnickety husbands and to offer new wives advice for managing their husbands. Joke recipes such as this proliferated not only in cookbooks, but would often find their way in newspapers and magazines of the period. 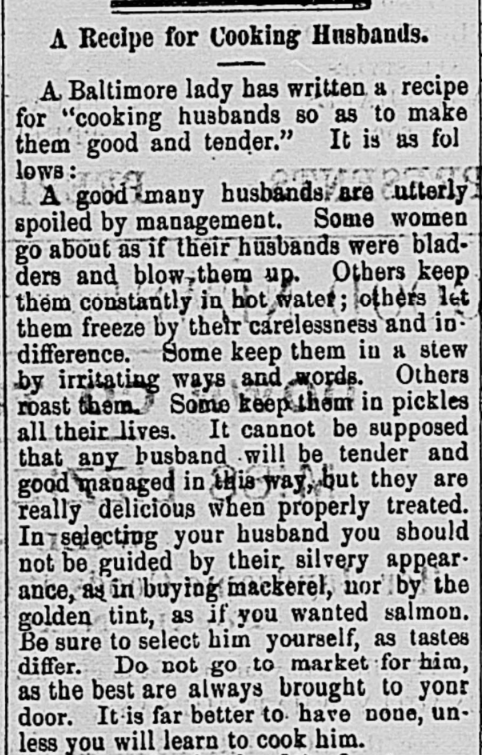 Many of the cookbooks included in our collection can show many signs of wear and tear—including food stains, burned edges, and even water damage. While sometimes, these marks can make reading the text on the page difficult, these signs of use also usefully indicate which of the recipes might have been a particular favorite of the previous owner or might have otherwise been returned to. These recipes necessarily demand a level of speculation since, often, crucial information about the author or former owners may be lost to time.

Although cookbooks and recipes were widely written in the period, locating books which are digitized and open-access can be difficult. Additionally, many cookbooks written in the nineteenth-century were written anonymously and so locating information about the author can present additional challenges. Texts of Taste works to locate as much information about the books recipes are being sourced from as possible, but in many cases, bibliographic information may be lost. While the loss of this crucial information does impact what can be known about the recipes in our collection, we hope that visitors will use the recipes as sites of autobiography. As scholar Janet Theophano writes, "the themes found in cookbooks are timeless: life and death, youth and age, faithfulness and betrayal, memory and forgetfulness. Yet cookbooks also tell us how to make beauty and meaning in the midst of the mundane—a concept especially important for women, whose lives often are punctuated by the demands of feeding others" (Eat My Words 6). As such, our hope is that the recipes within our collection provide insight into the ways in which women in the nineteenth-century told their own stories.